When the Sky Wreaks Havoc: Mitigating Loss with Captive Insurance

Arguably so, the American public harbored a deep fear in the years since Hurricane Katrina. It was for good reason--it was no holds barred in the media. News teams like CNN and FOX put away their differences to share images of the sky opening up and wreaking havoc on Louisiana. FEMA trailers… people on roofs…whole families beneath floodwaters. Devastation. We hoped it’d be the last we’d see of this kind of thing. But then Superstorm Sandy bore down on New York with a similar fury. Then Harvey in Houston. Fast forward a few more years, and people were grappling with tornadoes in Alabama. The point here is that the effects of severe weather are felt viscerally across the country, with many seeking ways to get ahead of it. Businesses are taking steps to cover potential loss with new technology and of course, insurance. But the reality is, commercial policies are limited—they can cover renovations to damaged homes but do little for businesses vulnerable to risks spawned by Mother Nature. Specialized or ‘non-standard’ coverages are often too expensive for the average mid-market business owner, if even available at all. But it’s not all gloom and doom.

Businesses can protect their financial integrity with their own, tailored coverages underwritten by a captive--an insurance company that’s been specially formed to insure them.

Of course, mid-market organizations are doing all they can to prepare for that next big storm or flood. But when loss comes to fruition, the broader, more comprehensive coverages offered by the captive insurance company can keep their operations running when those precautions fall through. As hurricanes, tornadoes, floods, and other events continue to manifest, business leaders should think about how alternative risk planning by way of a captive can help fortify their businesses— both physically and fiscally.

The notion that global warming will make the weather much worse is up for debate. We understand that there are questions about whether severe weather events are increasing in number as a result of human activity. Whether you believe in global warming or not, there will always be weather-related risks to contend with. Hurricanes and tornados are here to stay. And business owners should take measures to protect the businesses they’ve worked so hard to build.

Capstone has taken a look as to how these weather events have already affected businesses, how they’re projected to impact businesses in the future, and the lessons gleaned from the effects of underinsurance. Keep reading for more. The Chaotic Climate & the Impact of Underinsurance

When you’re in business, there are a few things that are always top of mind: overhead, taxes, and marketing, among others. Insurance, depending on your industry, might be an afterthought. Or, it’s possible that you know some of the risks your business might experience and go from there in purchasing a ‘catch-all’ policy. But weather events are largely unpredictable and chaotic. Severe weather can cause damage over and above what may be covered in an insurance policy. For industries such as construction, manufacturing, agriculture, and even some technological fields, businesses may have special risks that require coverages that don’t exist commercially. Underinsurance has the potential to irrevocably harm a business’s financial stability.

Currently, many businesses opt for commercial business interruption policies to recoup the revenue or profits lost during the period of closure; operating expenses including employee wages, taxes, loan payments, rent, and relocation expenses for temporary space.

But storms like Hurricane Harvey warrant more comprehensive coverage. In fact, according to a survey of business owners conducted by The Travelers Companies, 43% consider business interruption losses as their biggest weather-related risk, but nearly 40% of respondents don’t have a business continuity plan in place and 10% didn’t know if their firms had one.
It means that underinsurance, when unpredictable weather emerges, is common and financially dangerous.

According to the National Oceanic and Atmospheric Administration (NOAA), in 2018 hurricanes Michael and Florence each caused about $25 billion in damages, contributing to a total toll of $91 billion from that year’s weather and climate disasters. In 2017, NOAA’s total was even bigger: $306 billion, because of the massive destruction from hurricanes Harvey, Irma and Maria. Losses for 2017 and 2018, productive investment fell about $400 billion in total in those years as a result. (Source: The Washington Post, A $1 trillion economic blow?).

The U.S. Government said in its Fourth National Climate Assessment, a two-part congressionally-mandated report released in 2017 and 2018, that the consequences of climate change could cut U.S. GDP anywhere from 6 to 14 percent by the end of the century. And the World Meteorological Organization reports an acceleration in greenhouse gas concentrations, rising sea levels, and exceptionally high land and ocean temperatures.

That’s all at a high level. For businesses specifically, weather events are forecast to have a significant negative financial impact. It’s also a call to business leaders to consider the implementation of alternative risk planning, which may include the formation of a captive insurance company. Opting for a captive arrangement offers both primary risk coverage and ancillary financial benefits, including:

• A supplemental safety net when disaster strikes. A commercial insurance policy can and should remain in place, while the captive fills costly gaps in coverage.

• Certain tax advantages, including a 0% tax on the captive’s underwriting profits for captives written under 831(b) of the Internal Revenue Code.

• Dividends; when disaster doesn’t strike in a given year and the captive has accumulated a significant surplus (usually after two years), the operating company can take a dividend and reinvest the funds into the organization.

• Secured loans that can be used to rebuild after a disaster, pay off legal claims, sustain operations during lulls/waiting periods, and more.

These benefits make a real impact when commercial claims are denied and/or if the policy doesn’t cover certain risks. Take, for example, the National Flood Insurance Program (the NFIP), created by Congress to help make flood insurance more affordable for both individuals and businesses in higher-risk areas. One exclusion in the policy disclaims coverage for a specific type of property damage caused by floods. Dubbed, the “earth movement exclusion,” it will not cover sinkholes, de-stabilization or movement of land that results from the accumulation of water, or gradual erosion (Source: National Law Review). This means that businesses might be on the hook for these types of damages if there isn’t a backup plan or supplemental insurance. Purchased supplemental ‘gap’ coverage may be there when a loss occurs. But it will not provide the broad, comprehensive coverage + ancillary financial benefits of the captive. 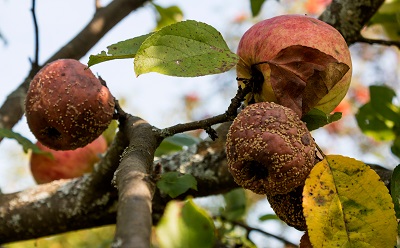 Erratic weather patterns are causing concern across industries, including farming & agriculture. For apples, warmer temperatures in winter will force trees to flower prematurely and expose buds to unpredictable weather, like snow, ice, frost, hail, and more. Apple farmers have taken to diversifying their crops and experimenting with technology to mitigate warmer winters and drought. These measures include a more efficient irrigation system, netting to block hail and other precipitation, and warm-air wind machines to prevent crop frost.

For many businesses, this technology has been largely unaffordable; their will to protect crops hasn’t been enough—resources are required. According to a CNBC, more than 2,000 farms closed in New York State between 2012 and 2017. Farmers still bear the brunt of risk and it’s projected that consumers will soon feel the effects. A report from the Intergovernmental Panel on Climate Change said global warming is already exacerbating food insecurity by destroying crop yields, decreasing livestock productivity and increasing pests and diseases on farmland (Source: Climate change could trigger an international food crisis, UN panel warns).

That was just one industry example.

Concentra, a national health care company focused on improving the health of America’s workforce concluded that in construction, unpredictable rain and flooding can lead to deteriorating wood and slippery surfaces, increasing the risk of injuries and unsafe working conditions.

Energy companies are also affected. A large energy provider that delivers electricity to 2.9 million utility customers in Arkansas, Louisiana, Mississippi, and Texas was compelled to shell out nearly $400 million in restoration costs after Hurricane Isaac damaged its distribution infrastructure.

And then there was Exxon Mobil--its pipeline beneath the Yellowstone River in Montana was damaged by flood debris and damaged the surrounding area. It cost the company $135 million in property damage.

Mid-market organizations face the same risks, which can be addressed by a solid and comprehensive risk coverage plan.

Captives have long been a smart choice for large companies seeking financial stability and now, this opportunity is available to the middle market.

The turbulent weather patterns projected by today’s scientists may take another 50 to 60 years to fully come to fruition. But storms, droughts, floods, and fires are happening now. Business leaders, opting for a captive can be your version of ‘taking cover’ when the sky opens up again. Be prepared.